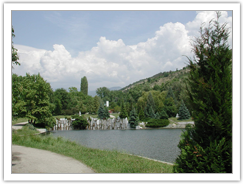 The town of Sandanski is a resort situated in the west slopes of the Pirin Mountains, along the mouth of Sandanska Bistritsa River and stands at 225 m altitude.
It’s famous for its unique climate and its mineral springs. The influence from the Mediterranean Sea makes the winter mild and the autumn- warm and longer. The annual average temperature is 14.7°C.
The mineral springs in Sandanski have been used as far back as in the times of remote antiquity.

Sandanski arose as a Thracian settlement, called Medius, around 2000BC. Later the Romans renamed it Dezudava and in 6th century the Slavs called it St. Vrachove in the memory of the two brothers Kozma amd Damyan who were native doctors. In 1947, the city accepted its present name of Sandanski. 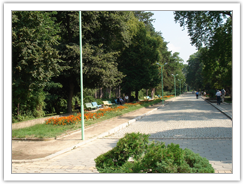 The city features 6 mineral springs, and water temperature is between 78 °C to 81 °C. The total capacity is 1400 liter per minute.
The resort is visited all year round and it’s known as a balneological center that has a favorable impact on chronically pulmonary diseases, skin diseases, kidney diseases, and nervrological diseases. The healthy climate of the town has turned it into one of the most significant resort centers for treatment of problems of the upper respiratory tracts and the lungs. It is famous as the best natural treatment centre of bronchial asthma in Europe.

The public park with a pond and over 200 Mediterranean plant species covers a territory of 334 acres. Among the city attractions are the Archeological museum, the art gallery, the architectural complex with the monument of Spartacus, the "St. George" church, the "St. Bezsrebrenitsi Kozma and Damyan" Monastery, etc.
Each year in September Sandanski hosts the Pirin folk Festival.